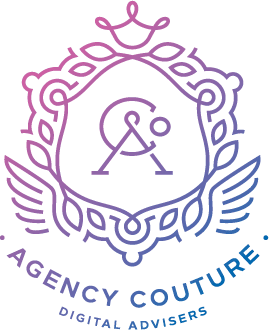 This website is offered as a free service to you. Your use of this website constitutes your agreement to all the terms of use contained in this document and the Privacy Policy. Agency Couture is also commonly referred to as aCo Digital, aCo, or aCo.Digital.

The information that is made available on this website is intended for general information purposes only and is provided on an ‘as is’ basis without any warranties of any kind. Neither we, nor any of our associated Companies, accepts any liability for any loss arising as a result of reliance on the information contained on this website.

All Charges are non-refundable and apply at all times regardless of Application usage or termination of usage.
ACO in its sole discretion may offer refunds on a case by case basis.

You agree to refrain from engaging in any of the following prohibited activities:
Modifying, altering, reproducing, copying, distributing, or disclosing any confidential part of the Services in any medium (including but not limited to any information that you are aware or unaware of due to its confidentiality; information whose origin is unknown should be treated as confidential);
Attempting to interfere or interfering with system integrity or security;
Attempting to upload or uploading any virus, worm, code (malicious or otherwise), or other software through the Services; and
Attempting to seek or provide a service that ACO has classified as a "Zero Tolerance Service" in ACO's Zero Tolerance Policy.
Failure to comply with the terms of this Section 4 may result in your inability to access the Services or other forms of termination of access to the Services.

You are responsible for your use of the Services, and you agree to defend, indemnify, and hold Agency Couture, including our affiliates, subsidiaries, parents, successors, partners, contractors, assistants, and assigns, and each of our respective officers, directors, employees, independent contractors, agents, and shareholders, harmless from any claims, actions, suits, losses, costs, liabilities, and expenses (including reasonable attorneys' fees and costs) relating to or arising out of your use of and participation in the Services, including:
your breach of these Terms or the documents incorporated herein by reference;
your violation of any law or regulation or the rights of a third-party, including, without limitation, Fulfillers, Users, other motorists, and pedestrians, as a result of your own interaction with such third-party;
any allegation that any materials that you submit to us or transmit through the Services infringe upon or otherwise violate the copyright, trademark, patent, trade secret, or other intellectual property or other rights of any third-party;
your ownership, use, or operation of a motor vehicle or passenger vehicle, or any other relevant tools (including but not limited to: laundry machines, cleaning equipment, or stationary or technical equipment), including your provision of Services as a Fulfiller; and/or
any other activities in connection with the Services.
The indemnity provided for in this section shall be applicable without regard to the negligence of any party, including any indemnified person.

All packages and tools include taxes

Tool setup may take up to 12 months

Domain management is required for email and single sign on (SSO)

IN NO EVENT WILL AGENCY COUTURE, LLC, INCLUDING OUR AFFILIATES, SUBSIDIARIES, PARENTS, SUCCESSORS, AND ASSIGNS, AND EACH OF OUR RESPECTIVE OFFICERS, DIRECTORS, EMPLOYEES, INDEPENDENT CONTRACTORS, AGENTS, OR SHAREHOLDERS (COLLECTIVELY "ACO" FOR PURPOSES OF THIS SECTION), BE LIABLE TO YOU FOR ANY INCIDENTAL, SPECIAL, EXEMPLARY, PUNITIVE, CONSEQUENTIAL, OR INDIRECT DAMAGES (INCLUDING BUT NOT LIMITED TO DAMAGES FOR DELETION, CORRUPTION, LOSS OF DATA, LOSS OF PROGRAMS, FAILURE TO STORE ANY INFORMATION OR OTHER CONTENT MAINTAINED OR TRANSMITTED BY THE SERVICES, FINANCIAL LOSS ARISING FROM USING THE SERVICES, FINANCIAL LOSS ASSOCIATED WITH FULFILLERS FAILING TO COMPLETE TASKS, SERVICE INTERRUPTIONS, OR FOR THE COST OF PROCUREMENT OF SUBSTITUTE SERVICES) ARISING OUT OF OR IN CONNECTION WITH THE SERVICES, OR THESE TERMS, HOWEVER ARISING, INCLUDING NEGLIGENCE, EVEN IF WE OR OUR AGENTS OR REPRESENTATIVES KNOW OR HAVE BEEN ADVISED OF THE POSSIBILITY OF SUCH DAMAGES. THE SERVICES MAY BE USED BY YOU TO REQUEST AND SCHEDULE TRANSPORTATION, GOODS, OR OTHER SERVICES WITH THIRD-PARTY PROVIDERS, BUT YOU AGREE THAT ACO HAS NO RESPONSIBILITY OR LIABILITY TO YOU RELATED TO ANY TRANSPORTATION, GOODS, OR OTHER SERVICES PROVIDED TO YOU BY THIRD-PARTY PROVIDERS OTHER THAN AS EXPRESSLY SET FORTH IN THEIR TERMS. CERTAIN JURISDICTIONS MAY NOT ALLOW THE EXCLUSION OR LIMITATION OF CERTAIN DAMAGES. IF THESE LAWS APPLY TO YOU, SOME OR ALL OF THE ABOVE DISCLAIMERS, EXCLUSIONS, OR LIMITATIONS MAY NOT APPLY TO YOU, AND YOU MAY HAVE ADDITIONAL RIGHTS.

2. Website Hosting Pre-Payment Terms: Agency Couture may offer a discount for paying an entire year of hosting service up front. Refunds will not be issued in the case that a customer cancels their hosting service before the period they have pre-paid for.

We can help you..
Tell your online visitors about the work you do.
Your site, Your story, Your brand.